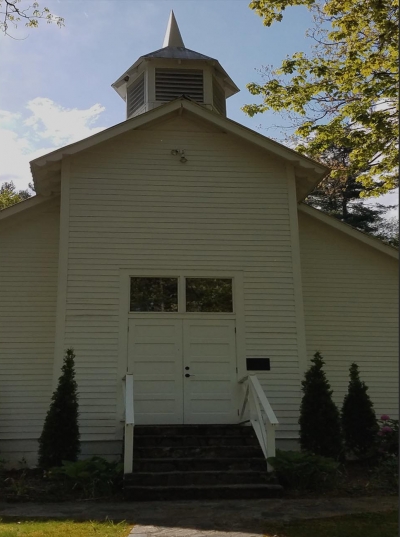 Lake Toxaway Methodist Church, a simple Gothic Revival-style frame building dating from 1912, overlooks scenic Lake Toxaway in the Blue Ridge Mountains of Transylvania County. Originally called Methodist Episcopal Church South, the building was erected by volunteer Methodist farmers using donated pine lumber and building supplies. The church, with its original weatherboard, Gothic-arched windows and six-sided belfry, is one of the most stylish and best preserved of the small group of historic churches of traditional frame construction surviving in this mountainous county. At the same time that the area was developing as a luxurious resort for wealthy industrialists, local farmers built this church with donated materials and volunteer labor on a lot given to them by Edward M. Jennings, the Pittsburgh developer who owned Lake Toxaway.

The year 1896 was a significant one for the people of the Toxaway district of Transylvania County, particularly the Methodist congregation who were descendants of German, Welsh, and Irish settlers who had come from Virginia in the 1700’s seeking land and relief from obligatory religious tithing. The Cherokee had moved west and men and corporations moved into western North Carolina, bringing with them the railroad, tanneries, lumber companies, and sawmills. In 1896 J. F. Hayes, of Newcastle, Pennsylvania, formed a group of stockholders whose purpose was “to build and develop fine resorts in Transylvania and Jackson counties,” and the name title the “Toxaway Company” was granted. From then until the present time, the Toxaway Company has been the predominant factor in the development of this area of Transylvania County.

At that time there were no church buildings in the area. Spiritual needs were met by itinerant preachers who arrived from time to time to perform marriages, christenings, and funerals and to conduct camp meetings at a site located about eight miles west of Rosman at the base of Toxaway and Cold mountains, encompassing the basin of the Toxaway River. The campsite was on the riverbank about one-half mile south of the church’s present location. In 1901, J. F. Hayes dammed the Toxaway River and flooded 540 acres of bottom land to create a resort lake. The Methodist camp meeting site disappeared beneath the waters of the new Lake Toxaway.

The history above was written by Jane Zetty who did all of the research in order to nominate the Lake Toxaway United Methodist Church to be placed on the National Register of Historic Places.